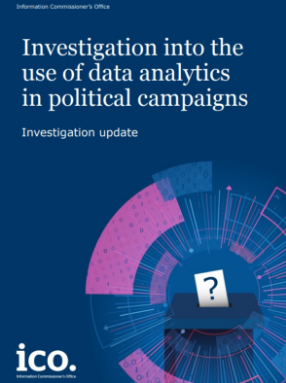 The Information Commissioners Office (ICO) in the UK announced its intention to fine Facebook £500,000 for security issues related to third party data harvesting.

It may also bring criminal action against Cambridge Analytica, a political consulting firm, for harvesting the data of millions of Americans without their knowledge before the 2016 presidential election. A team of over 40 investigators working for the ICO seized the Cambridge Analytica servers and are also planning to take action against other players like major data brokers, political campaigns, and the academic institutions that are developing data targeting techniques.

It is a step in the right direction for Data Protection and protecting the rights afforded to individuals. Elizabeth Denham, the UK Information Commissioner, has been steadfast in her approach and said in a statement that “Fines and prosecutions punish the bad actors, but my real goal is to effect change and restore trust and confidence in our democratic system,”.